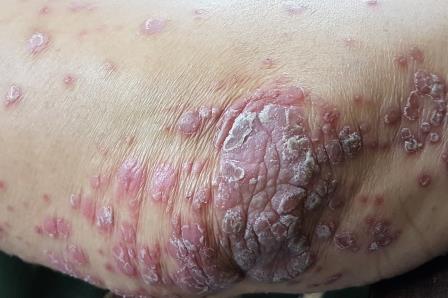 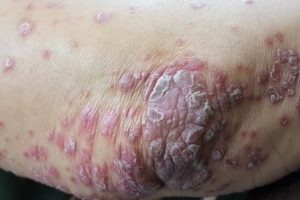 Psoriasis is a chronic skin disease manifested with scaly patches on the skin.

What are the manifestations psoriasis?
Scaly patches or plaques on skin are primary manifestations. Patients complain of scales that come off easily and get deposited on the clothes, bed and elsewhere. The patches may be sometimes reddish and itchy.
Common areas of involvement area scalp, elbows, knees, lower back but may involve wider areas. Some patients also have joint involvement with swelling and pain. Joint involvement may lead to significant immobility and even joint destruction after many years especially if untreated.
Although, most patients have limited disease, some may have wide spread disease. Moreover, some patients may have manifestations that are different from whatever have been seen typically (scaly plaque). A severe disease may develop pustules,or prominent generalised redness.

Why is psoriasis caused?
This is often mediated by some genes but not all cases are familial. This is basically an inflammatory condition and many things about its causation is yet unknown.

This is not infectious.

Can psoriasis relapse?
Relapse and remission is common and frequently there are noticeable fluctuations in different seasons. This is generally a chronic disease.

Are there any associated illnesses?
Not uncommonly, other conditions like obesity, dyslipidemia (abnormal fat level in blood), diabetes mellitus, heart disease are associated.

What should be avoided in psoriasis?

Although, psoriasis is spontaneous in occurrence, occasionally, some drugs may aggravate it. These are some anti-hypertensives (beta blocker, ACE inhibitors) lithium, pain killers (NSAID), antimalarials and some other drugs.
Smoking and alcohol intake should be stopped.
Itch and scratch can aggravate it.

Like many diseases, there is still no drug that can cure it but this can be controlled so that patients can lead a healthy life.
Depression, as in many chronic disease is common, more so by the information that it can not be cured. But plenty of medical conditions like diabetes, hypertension are never cured and only controlled. So, depression must be avoided.

What are the treatments available for psoriasis ?
It should be noted that many of the drugs used to treat psoriasis have known adverse effects on body. Thus, these are not used unless use is justified. Repeated blood and other tests are necessary during or before such treatment. Most importantly, patients should never do self-medication or even by anyone who is not a specialist in psoriasis treatment. Medicines should be taken only for the duration for which it has been advised. It should never be continued beyond the advised period.
Treatment is generally done by a dermatologist. When joint is affected, Rheumatologist should be consulted. Associated problems like diabetes, obesity and other disorders should be managed by physicians or other specialists. 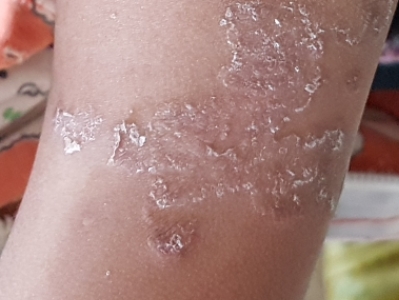 [Image- Itchy, scaly ring shaped eruptions!] This is the description of what you have on your groin (inner thighs), hand,{...}

Many people, especially women apply topical steroid on their face without knowing that the cream contains steroids. This is a{...} 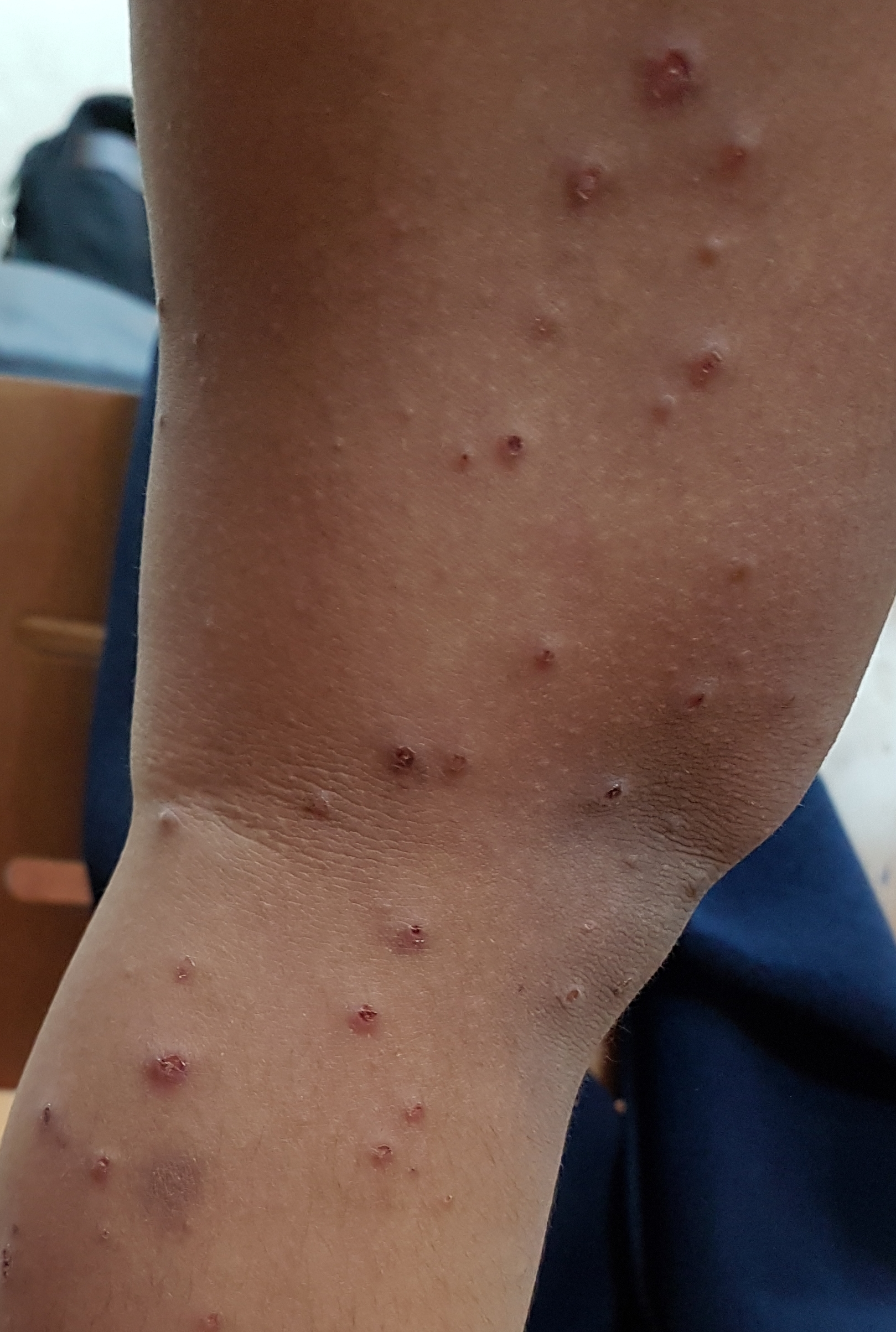 Children often develop itchy eruptions on their arms and legs. Interestingly these are much less on other parts of their{...}