Two extremely divergent situations exist in India, and possibly also in many other countries that have similar social, economic, religious, educational as well as political background.
Millions of people are regularly exposed to steroids unknowingly facing its various harmful effects in their body without any advice from a doctor. Most of these are self-medication or advised by non-medical peoples.
On the other hand, many people, with a preconceived idea that ‘Steroids Are Harmful’ are very much sensitive to all ‘steroids’. They overreact with the name of drug even when actually required or is advised by a qualified doctor. There are instances when people challenge the doctor asking the explanation for advising such ‘TOXIC’ drug to them! There are occasions when people have even taken legal steps against the doctors!

Let us know the true story.

People who are unknowingly exposed to steroids are usually advised by people who are not doctors for various indications. But there are people who avoid a revisit to the doctor and continue or re-start the previously prescribed drug that may contain steroid. The reasons may be many but financial issues many be the primary factor for such behaviour. Thus, these people use steroid, unknowingly for a prolonged and unsafe duration without the knowledge of the doctor. Let us understand each of these situations. But before that, who should have a brief knowledge about the various forms of steroids.

Steroids are medicines that have specific purpose and often can be life-saving. These should never be used without a prescription. Unfortunately, there is relaxed monitoring on the drug selling in India; steroids and many other strong drugs are easily available over the counter without any valid prescription.

Among the various types of steroids, the following needs discussion-

Corticosteroids –This has extensive medical use. This has various uses but should always be used under supervision because unregulated use can lead to various adverse effects. One of the side effects of the drug is edema (swelling of the body) due to water retention in the body. Unlike males who prefer anabolic steroids for muscle bulk, many females prefer this steroid for body weight gain and a fuller-cheek look. This practice can significantly harm the user. Increase in blood pressure, reduced bone density and increased blood sugar level are few known adverse effect of prolonged steroid use. There are obviously many other.

One of the most rampant misuses of steroid is in the form of various creams. Various fairness creams contain steroid. Application of steroid has an instant effect of whitening of the skin. Females, even males take a faster route towards fairness using these creams just for the sake of becoming more beautiful.

Steroids creams are medically advocated by dermatologists for reducing various skin pigmentation diseases. When advised by the specialist doctors, these are usually advised for a short supervised period. Enthusiastic people who are aware of the skin whitening properties of these creams often continue to use these beyond the advised duration without the knowledge of the dermatologists.

India is known for easily available medical advices from everybody. Thus, these creams are advised by friends, beauty parlours, colleagues, and even pharmacies to large number of people who have facial pigmentation or who simply want a fairness product. Neither the users and nor the advisers have any idea about the composition of such creams and the existence of the steroids in such creams.

This uncontrolled use of topical steroids is associated with various toxic effects on the skin. This causes acne, skin thinning, intolerance to sun rays, itching among many others problems. Interestingly, most of these problems do not manifest until steroid creams are stopped when all these problems suddenly erupt. Many of the prolonged users are well aware of this and they can hardly stop using these. With the continued use, they are more comfortable!

What is most important is meticulously following the advice with regard to the dose and duration of each of the drug including steroids. It goes beyond saying that people should depend on the doctors for the best possible advice on health related issues.

The bottom line is simple. We should not make ourselves guinea pig for experiment by some non-qualified people. Even the persistent application of an apparently safe cream may lead to irreversible damage of our skin. Second, we should not take a drug (be it steroid or else) without a doctor’s advice and never beyond the advised period.

Each time, re use of even the same medicine for same condition or a new condition should be confirmed by a doctor.

And finally, we should understand that steroids are not poison. These are rather excellent medicine. It saves us and cures diseases. But its indiscriminate use can lead to various problems.

We should have faith on qualified doctor and his/ her advice.

Many people, especially women apply topical steroid on their face without knowing that the cream contains steroids. This is a{...} 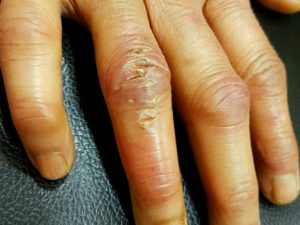 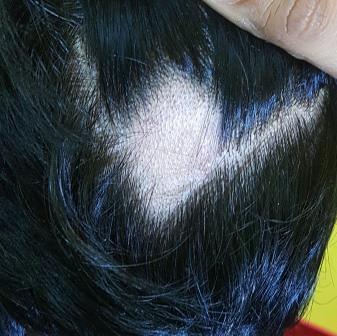 Alopecia areata, a medical term for localized hair loss. This is known as Tak Poka in some eastern Indian states{...}